The four oil paint and string pieces for the alpine theme of my current body of work, came together quite easily but the last two, which were just oil paint have been an epic struggle. All six paintings were inspired by the amazing, colourful bark of Snow Gums and referenced from photos I took while walking at Mt Erica, about 2 hours drive east of Melbourne. Some of the photos were taken only centimetres from the bark, some at about 1 metre away and others from 3 or 4 metres. The paintings too reflect this macro, intermediate and broader view. 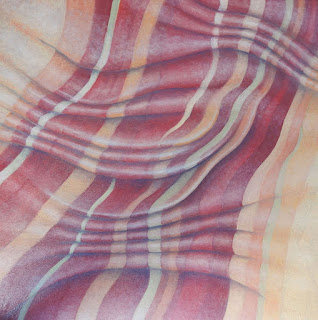 It was the intermediate view that I struggled with the most. I wanted to give an impression of the typical colours and mottled nature of different coloured strips of bark. But I also wanted to emphasise the beautiful and distinctive folding that occurs on the trunks of some of the more mature trees.

Achieving my goals, were quiet another matter and weeks were spent messing about in a haze of dissatisfaction, not helped by a lack of art time and ready mixed containers of paint going tacky.  The colours weren’t subtle enough. The folds didn’t jump out enough. I kept on looking at the canvases and shaking my head. 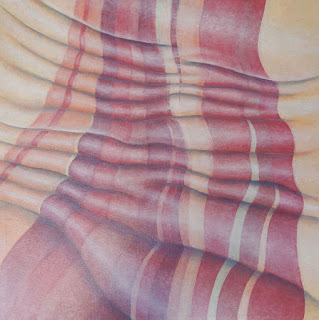 Finally, I had a clear space with no family commitments and no dramas so I painted for six days straight, and at last the job was done.
Posted by Sue Top at 5:41 PM